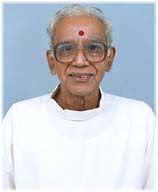 If anyone can spend his entire life joining together bits and pieces of facts and photos of tamil cinema with so much passion and patience, it could be none other than Film News Anandan. With a reputation for collecting and preserving all kinds of tamil film news and photographs beginning in the 1930s, Film News Anandan continues to reign supreme for his vast knowledge and continued service to the thriving tamil cinema industry.
But all signs were there at a very young age, when Anandan took up hobbies in photography and writing, producing and directing dramas. Anandan's love for the arts eventually became his greatest passion in life as he embarked into a new journey in the film industry in 1954 as an assistant to C.J.Mohan (who served as N.S. Krishnan's cameraman at the time). Soon afterward, Anandan found himself serving as a photo-journalist for his friend, Devarajan's publication, Film News. The name Film News not only became a catch phrase to his name, but also created a respect and adoration for him and his work as years passed by.
Film News Anandan entered a new phase in his career and his life, when he began his own news service titled Film News in 1958. Even today, the Film News office on Peters Road, Chennai continues to be the one-stop center for all types of tamil cinema news that one could possibly think of. Besides Film News, Anandan's bigger achievement came through his establishment of the Public Relations Officer post in Tamil Cinema. Yes, indeed, Film News Anandan was the first to create the post and serve as the very first P.R.O in tamil cinema for Nadodi Mannan which was produced and directed by M.G.Ramachandran himself.
His greatest ambition was to showcase all of his cine collections and memorabilia as a way to educate and arouse the interest of the public. Anandan accomplished organizing and presenting his first exhibition on the occasion of the Golden Jubilee of the Film Industry in 1981. He conducted a cinema exhibition as a part of the Tourist Fair on three separate occasions for which he won the Best Stall Award three consecutive years. Anandan also has the distinct honor of conducting exhibitions on Telegu and Malayalam films at the International Film Festivals in Hydrabad and Trivandrum in 1986 and 1988 respectively. More recently, Anandan was invited to conduct an exhibition celebrating the 50 years of A.V.M. Productions.
For such a man who has tirelessly worked to preserve both the past and present of tamil cinema, the awards and accolades have come aplenty. As early as 1986, Film News Anandan received the distinguised Y. Venkanna Clowdary's Kala Peedam award for his tremendous contribution to Human Progress as a Film Historian. In 1991, the Tamil Nadu State Government bestowed him with their highest honor in the title of Kalaimaamani. Similarly, in 1989, Anandan was honored as a veteran during the Golden Jubilee of the Film Chamber.
Over the years, Anandan has bagged Cinema Express, L.V.Prasad, S.S.Vasan, M.G.R., V.G.P, Lions, Ajantha, Mathi Arts Academy and Thums Up awards. He has also earned a service medallion from Madras Film Fans Association in 1980 and 1988. He was proudly bestowed with the title of Mobile Film University by Tamil Nadu Film Fans Association in Raajapaalayam and Thirai Thurai Agaraadhi by Kaviyarasu Kannadasan (Kalai Ilakkiya Maiyyam).
Last year, he was awarded the Kalai Selvam title by the South Indian Artist Association in Chennai. Furthermore, Film News Anandan was given world recognition this year (1998), by The American Biographical Institute of South Carolina (U.S.) as a veteran among 5000 people around the world. Film News Anandan's name was included in the book (Who's Who... ) released in January 1998, while he was awarded the Man of the Year for 1997 by the same institution.
S. Krishnaswamy had once written in The Illustrated Weekly in 1965 on Anandhan's work, stating "The collection is something wonderful. As you look through Anandan's albums, you travel through the years and recollect the faces of stars who have been lost in the shadows, and you feel as though an unbroken thread is connecting all these motion picture efforts together." All of us are glad that Film News Anandan's "unbroken thread" has connected with the Valai (The Web), where he begins a new journey in sharing his thoughts of the past and his insights into the future of Tamil Cinema. No amount of writing on my part can begin to cover the knowledge, patience and passion that Film News Anandan has invested in his work. It is indeed Anandan's words themselves that can make all the difference.
It is Tamil Thirai Valai's greatest pride and pleasure in having Film News Anandan join our team in the highest capacity possible: as a writer about the evolution of tamil cinema. We wish him tremendous success in this new endeavour and hope to provide as much support to tamil cinema as we possibly can through the web. Above all, we hope to preserve atleast a little of the history of Tamil Cinema that Film News Anandan has cared and nurtured, for so long.
Posted by G.BALAN FILM PRO at 9:48 AM 1 comment: